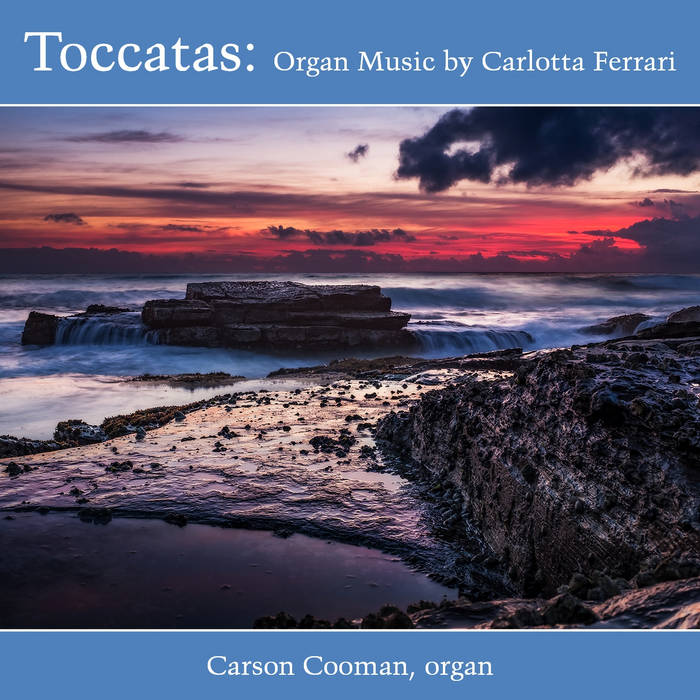 This album contains 10 dramatic and colorful organ works by Italian composer Carlotta Ferrari (b. 1975). Educated at the Conservatory in Milan, Ferrari has composed in many genres, developing a personal language that is concerned with the blend of past and present. Her compositions have been performed frequently around the world. She is currently the chair of music composition at Hebei Normal University in Shijiazhuang, China.

"La salita al Mirteto" (The Climb to Mirteto) is subtitled “Meditazione al santuario di Nostra Signora del Mirteto di Ortonovo.” It is inspired by the Shrine of Our Lady of Mirteto, a 16th century shrine at Ortonovo in the Liguria region of Italy. The composer writes: “The piece is polymodal; built on three different modal scales, it represents the relationship between nature, art, and humankind, which is the connecting element. All three elements share the presence of divine inspiration. The white marbles of the sanctuary, shaped in soft waves, along with the colors of the surrounding nature and the sky, invite to meditation.”

"Toccata misolidia" is based on two different versions of the same mixolydian modal scale, both combining together throughout the piece. The composition is articulated in two levels: the level of the modes themselves, and the upper lever where the mixolydian G sections act as ‘repercussio’ for the mixolydian C parts.

"Nozze mistiche" (Mystical Marriage) is inspired by “Sposalizio della Vergine” (The Marriage of the Virgin), a 1523 painting by Rosso Fiorentino (1495–1540). It hangs in the Basilica di San Lorenzo in Florence, Italy.

The composer writes: “Written after a weekend in Firenze, 'Dialogo di San Lorenzo e Santo Stefano' depicts the ideal dialogue between the two saints as imagined by Donatello, one of the most visionary artists of the early Renaissance, in his famous plaster relief inside the Sagrestia Vecchia in the church of San Lorenzo. It is a polymodal neo-gothic passacaglia ending with a rearranged Landini cadence, an homage to the great master of counterpoint buried in the same church.”