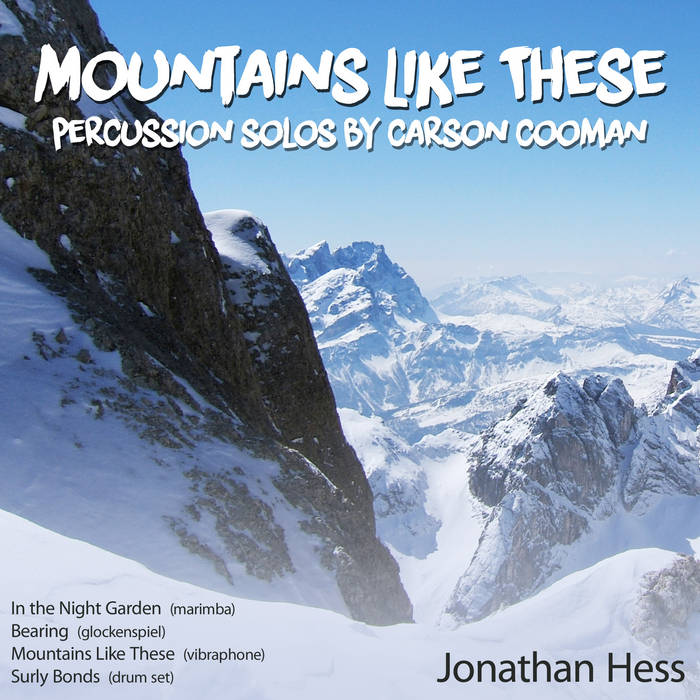 "In the Night Garden" (2010), virelai for solo marimba, was commissioned by Richard Mason and written for and dedicated to percussionist Peter Jarvis.

“We cannot love to live
if we cannot bear to die.”
— William Penn


"Mountains Like These" (2007), capriccio for solo vibraphone, was commissioned by and written for percussionist Mike Perdue. The work opens with the gentle unfolding of a series of pitches, outlining a harmonic field that will be transformed and explored throughout the remainder of the work. Written while in Aspen, Colorado (amidst mountains of all shapes, colors, and sizes), the music explores the sense of adventure one can experience when traversing a new landscape.


"Surly Bonds" (2009) for drum set was commissioned by Calabrese Brothers Music, LLC and was written for and dedicated to percussionist Peter Jarvis. The principal underlying rhythm of the work is a somewhat martial ostinato presented quietly on the snare drum. This unchanging rhythm provides a grid against which other colors and rhythms attempt to break the “surly bonds” and assert their own rhythmic identity. After a first unsuccessful attempt to overwhelm, the voices try again—succeeding this time in achieving release in a free, cadenza-like passage. However, the ostinato returns again until the work ends with the almost “desperate” silence between the sounds of bass and snare drums.


A specialist in contemporary percussion, Jonathan Hess has been praised for his “power and finesse" by the Boston Classical Review and for his "exacting milieus" by the Boston Globe. He is a founding member of the Boston Percussion Group (BPeG) and has been featured with Boston Musica Viva, Alea III, Dinosaur Annex and Monadnock Music. Jonathan has performed and recorded with the Boston Modern Orchestra Project (BMOP/Sound) and plays in the pit for Boston's Odyssey Opera. In addition to his work in contemporary music, he is the timpanist for Grand Harmonie, an ensemble dedicated to inventive and compelling performances of 19th century art music on historical instruments. He has also performed and recorded with Boston's Handel and Haydn Society, Boston Baroque, Canto Armonico, and Cambridge Concentus.