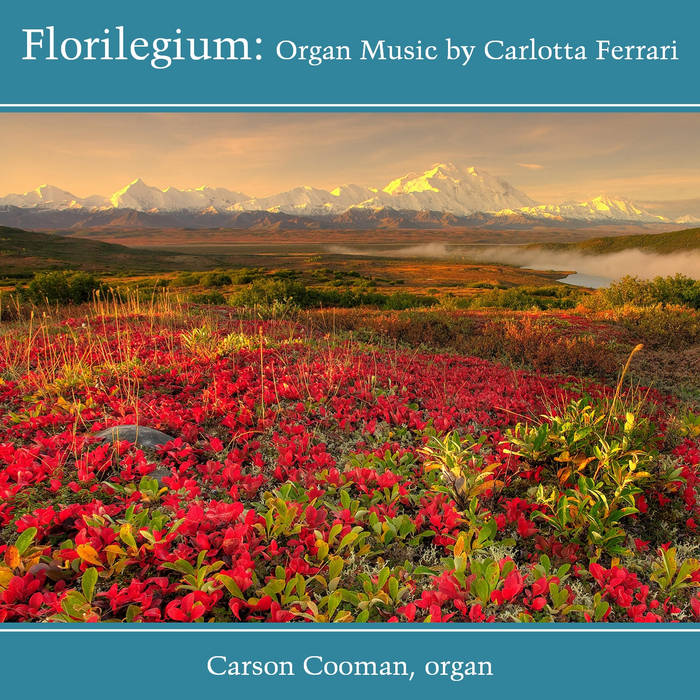 This album contains four large-scale organ works by Italian composer Carlotta Ferrari (b. 1975). Educated at the Conservatory in Milan, Ferrari has composed in many genres, developing a personal language that is concerned with the blend of past and present. Her compositions have been performed frequently around the world. She is currently the chair of music composition at Hebei Normal University in Shijiazhuang, China.

"Concertino per organo solo" is a contemporary re-imagining of the baroque concerto genre. The first movement employs a traditional concertante texture with its contrast between “solo” and “ripieno.” A lyric adagio and a jaunty scherzo form the middle movements, and a joyous finale brings the work to a conclusion.

"Florilegium modalis" is a collection of 13 diverse organ pieces, all of which are composed using a harmonic language derived from a transposing modal system, Restarting Pitch Space, originally developed by Carson Cooman in 2005.

"Triptych of Peace" is inspired by three statements about peace, taken from authoritative editions of the holy books of the three main Abrahamic faiths. The composition is divided into three sections, each representing one of the three faiths. These three “characters” are defined by three different melodic ideas, all based on the same musical modal scale. The three musical ideas then are all combined together at once at the end of the piece (in the coda), in order to represent unity in diversity.

1. The Pure: “Observe the pure person, consider the upright; for the peaceful person will have posterity.” (Psalm 37, Complete Jewish Bible, translated by David H. Stern)
2. The Peacemaker: “Blessed are the peacemakers, for they will be called children of God.“ (Matthew 5:9, New Revised Standard Version Bible)
3. The Believer: "O you who have believed, enter into peacefulness.” (Surah 2:208, the Quran, translated by Mohammed Mahmoud Ghali)

"The Garden of Dark Delights" is inspired by the famous painting triptych "The Garden of Earthly Delights" by the early Netherlandish painter Hieronymus Bosch (1450–1516). The structure is rhapsodic in order to reflect the many diverse situations in which the characters of the painting are involved. Each element of this work is connected very directly to an aspect of the painting. The initial toccata is an introduction referring to the creation as it is depicted in the back sides of the closed panels. Then the rest of the piece follows a mirror-like structure where the ricercare and its symmetrical passacaglia, along with the imitatio violistica and its “doppelganger” point d’orgue, represent the two side panels with their wide range of human experiences, both positive and negative.